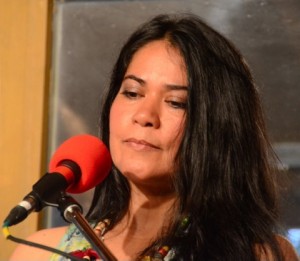 Singer and Brazilian percussionist Regina Gomes Teixeira was born in the culturally rich North-East of Brazil, where music permeates every aspect of daily life. She studied Brazilian guitar during her teenage years and, at 17, became the lead singer of Dedo Verde, a popular samba band from Guimaraes. After moving to Canada, Regina became actively involved in promoting her Brazilian culture by hosting annual Brazilian carnivals. As lead singer/percussionist or as a guest, she has collaborated with a great number of musicians and has appeared on numerous radio and television programs. She currently leads Florquestra (www.florquestra.com), a versatile band that performs as a duo to ten or more members depending on the event, and pursues numerous musical projects. Regina’s truly beautiful voice, natural rhythm and radiant, warm, joyful personality take her audience on a rich musical and cultural journey sprinkled with moments at times deeply moving and at times full of spontaneous fun.