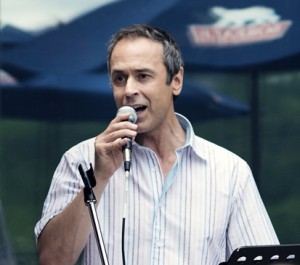 Jerry Sociedade has been singing and performing for over 10 years in choir and small group settings and more recently with Wave and local professional jazz instrumentalists. He was initially drawn to dance and latin music in his early 20s but later found jazz vocal performance to be even more personally rewarding. Jerry speaks Portuguese as his mother tongue and lived in Brazil briefly in the late 1990s which nurtured his love of Bossa and other Brazilian rhythms. He held professional positions in Montreal and Ottawa which led to frequent travel to South American countries where he further explored Latin music and culture. His warm style and personal connection to Brazilian and Latin sound contibutes to vibrant performances where he shares his infectious energy with the musicians and audience.